In 1900, at the seventh Secession exhibition, Klimt exhibited the first version of Philosophy, one of his three University of Vienna Ceiling Paintings. Klimt was wary of showing the preparatory version (the final work was not completed until 1907), however, the Secession committee had announced its inclusion in the show and had reserved a prominent place for it in the first room of the exhibition. The painting shows a group of figures on the left, ranging from children at the top to a decrepit old man at the bottom. On the right is a sphinx-like head, suggesting that only with the aid of philosophy or knowledge, represented by the female head at the bottom of the picture, can one make sense of the world.

Philosophy was immediately criticized for its mysterious, allegorical imagery, which was at odds with the academics' perception of themselves as rational beings. Not only do the figures have no recognizable aim, worse, the painting illustrates a widely held idea of the period (although it was unpalatable to the academics): that the purposeful progress of history was ultimately governed by incomprehensible and uncontrollable cyclical forces of nature. An open protest letter was signed by 11 professors, while the Rector of the University issued a press statement saying that philosophy was based on the exact sciences. Even when the painting was taken to the World Fair in Paris later that year, where it was awarded a prize, the furore continued.

The Tree of Life

Portrait of Adele Bloch-Bauer I

Judith and the Head of Holofernes

The Three Ages of Woman 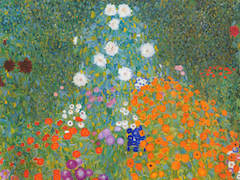