Gustav Klimt and his paintings

Gustav Klimt was seen as an artist who was far ahead of his time, and much of the work that was produced during the Austrian born artist's career, was seen as controversial. It was criticized due to the erotic and exotic nature. Although symbolism was used in his art forms, it was not at all subtle, and it went far beyond what the imagination during the time frame accepted. Although his work was not widely accepted during his time, some of the pieces that Gustav Klimt did create during his career, are today seen as some of the most important and influential pieces to come out of Austria.

Gustav Klimt was born in Austria in 1862. His father worked as a gold engraver, but was not very successful in his trade; for this reason, the family did not live a great life, and Klimt was raised in poverty stricken areas, with very little as a young child. In 1876, when he was 14 years old, Klimt enrolled in the Vienna Public Arts Schools; he was noticed right away for the talent and the art forms he created. Because of this, he received his first commission to create art for public viewing, while he was studying.

During the 1880s, Gustav Klimt, his brother Ernst, and Franz Matsch, begin a productive cooperation. They begin to do work in theaters, in churches, and public work in museums; many of the pieces which they created, were ordered by patrons who frequented the locations which they created works for. During this time, Gustav Klimt also created a piece for the Burg Theater, as well as the Kunsthistorisches Museum, which is located in Vienna. The Allegories collection that he submits, is seen as a creative, and timeless piece; because of the work, he is commissioned to do a second piece for the museum. In this second collection, the style which includes gold paint, abstract space in the art, and exotic symbolism of the female figure, is a prominent style, which he sticks with for future pieces that he creates. 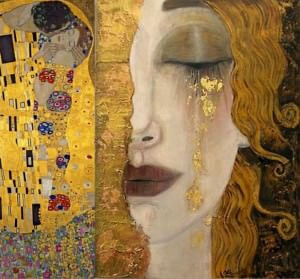 In 1891, Gustav Klimt enrolls and becomes a member of the Co-operative society of Austrian artists, and the following year, both his brother and his father pass away. It is during this time that he decides to move to a larger studio, so that he will be able to create more, and will have more room to delve into the art forms he wants to work on in the future. In 1893, Gustav Klimt and Matsch are commissioned to paint the ceiling of the cathedral, in the new university of Vienna. During this period, both artists have a falling out; this in turn slows down the work, since both are taking a different approach in creation. Many of the pieces that were designed for the university, including "Medicine" and "Jurisprudence", are not widely accepted by the local community, and are met with disdain due to the extreme symbolic nature in the art forms that were created in this public institution.

Due to the disgrace, and disdain of locals, Gustav Klimt feels that his work and popularity are taking a turn for the worst; it is in 1897 that he begins the Secession Movement. This movement takes focus on young artists, in an attempt to expose their work, and help bring foreign art forms to the Vienna based magazines. In 1898, the movement has its first organized exhibit, which draws in a very large showing, of about 57,000 visitors. From this period, to about 1905, Gustav Klimt was a central force and leader of this movement; in fact, during this decade, it was the most popular, and most well known art movement in Vienna.

Although Gustav Klimt and his former partner had a falling out, in 1900, the first exhibit which he created for the University of Vienna, was laid out for public display. It was presented at the Paris World Fair, and he won the Grand Prix award for this piece. He continues the work in the university through 1901, even though it is met with criticism by many locals in Vienna.

After leaving the Secession Movement in 1905, Gustav Klimt takes on a new approach, which is not well accepted in Vienna; not only by other artists, but by the locals either. During this period of time, nude women is a subject that Klimt always returns to, as artists have always returned to beloved themes - Van Gogh his Self-Portrait, Cezanne his Apples. Many of Klimt's women were painted in evocative and erotic positions that emphasised sensuality and sex. They brazenly confronted the viewer with their gaze as well as their nudity. They were controversial images but appealed to a new sensibility, a celebration of sexuality that was only just emerging in a city and a society that was the playground of another famous Austrian, Sigmund Freud. In the same year, Freud published Three Essays on the Theory of Sexuality, a book that was to profoundly challenge attitudes to sex. Like Freud, Klimt wanted to put sexuality in the public sphere. He creates various pieces, which include: Danae, and The Kiss, which are extremely erotic and exotic in nature. Up until about 1914, many of the pieces that he created, took on this sexual under pining, and were not widely accepted, in part due to their graphic nature, and in part because of the time period that he lived in and worked in.

In 1911, Gustav Klimt travels to Florence and Rome, and creates several pieces. Death and Life, The Maiden, and The Bride are among the landscape pieces that he creates during the next few years. Outside of Vienna, these pieces were a bit more widely accepted, namely due to the different art forms in regions outside of his home city. Although his work was still graphic in nature, and took a non traditional approach to depicting landscape, and the human figure, much of the work which he created only a few years prior to his death, were more widely accepted outside of Vienna.

In 1918, Gustav Klimt suffered from a stroke in his apartment; and, on February 6th of that year, he dies due to pneumonia. Although much of his work was not accepted during his career, due to his intense style, and graphic depictions, it was far more accepted following his death. In addition to the sales of his pieces increasing post death, many of the pieces that Gustav Klimt did create during the course of his career, were seen as some of the best to come out of Vienna, and some of the most influential pieces for future artists coming out of the city.

The Tree of Life

Portrait of Adele Bloch-Bauer I

Judith and the Head of Holofernes

The Three Ages of Woman